skip to main | skip to sidebar

So I was at Nitro this past Monday. If you look reeeeaally hard, you can see my "Give us Jushin Liger" sign at various points throughout the broadcast. I always hated the crowd members with these things, anyway.. No matter what they did to it on the live broadcast (which I haven't finished putting myself through yet), let me tell you firsthand.. the show blew.

Not only did it blow, bite, suck, swallow, bake a cake, and do a little dance.. but it asked for seconds. If you're looking for some out-of-context notes from the show, I've got a couple. Want a story or two? Sure, I'll throw ya a bone. I'm just gonna warn you now, it may get wordy.. and it won't be pretty.

I had a plan. For days prior to this, I'd constructed what I thought to be a sensible agenda.. making the voyage from Muncie to Indianapolis and back, stopping to see my folks, catching a bite to eat, seeing the stars, and getting my column pumped out before I hit the sack. Kids, if there's one thing you should learn about a vacation, trip, event, etc... don't plan it. Don't try to plan it. Don't let the word plan enter your mind. Because the moment you do, nature begins to plot against you. Everything that can go wrong will find a way.. and then some.

I glanced through my syllabus around noon, and figured out that there's no set number of absenses before becoming inexcusable for my 2:00 Bio lecture... so I got a jump-start on the day by skipping it. I'm a college boy, it's all good.. besides, I haven't missed a lecture yet. About 3:00, half an hour before I'd planned to depart, my roommate and I realize we never made our signs. So we haul over to Village Pantry across the street, pick up a couple sharpies and grab my other roommate's forgotten Jar-Jar Binks promotional posters from Hollywood Video. We tape those bad boys to the board, face down, and utelize the only good part of the damned gungan poster.. the back. One hour and several trippy sharpie-fumes-hallucinations later, we emerge victorious, carrying two double-sided signs that, in addition to my previously mentioned phrase, read "I Schill for Schiavone", "I...I Love.." and the ever-popular "Poop".

We hit the road about a half hour behind schedule and almost drive through my other roommate, who tosses rent money my way.. cool. So we're off, making damn sure we don't leave the tickets behind. Surprisingly, besides the morons-with-licenses that frequent the Muncie, Indiana pavement, the drive ends uneventful and we stop to say a quick hello to my dad and his wife. As we're ready to take off, he says those fateful words that haunt me to this day; "They're not gonna let you bring those signs inside". We shrug the warning off nonchalantly and travel along our merry way.

If you're ever behind building a city street system, do me a favor... label the roads. Indianapolis has a big problem with this, assuming everybody knows exactly where they are and exactly where they're headed. Why blow the money on signs when everyone already knows where they're at? Now don't get me wrong.. I know Indy. I just need a little guidance finding a brand-new arena (Nitro was the second event to be held in this 'Conseco Fieldhouse'), located on some ass-backwards street on the South side of the city. But we finally arrived, early no less, and walked from our spot in a garage 4 blocks down the vein of the city to the arena.

We hung outside the arena near the entrance for a while, basking in the glory of our signs, before we caught a glimpse of the only wrestler we'd see outside of the ring, Norman Smiley. He was on a cell-phone (I would be too, after seeing what a match he was booked in), so I didn't bother him.. I offered a wave and a big wiggle and let him be. Some of the other fans weren't as considerate, but that's life.

We get into the arena, hand the man our tickets, and he tells us "Your signs are too large", and reaches for the ticket behind me. I ask what the specifications are for size, and he tells me "posterboard". "Good;" I respond "because these are written on the back of posters". Silence. I wait for his intelligent comeback, but there is none.. and now I'm the dickhead, holding up the line. I ask again, and the ticket-man puts forth the effort of asking the guy working next to him if this poster is ok. The answer is no, and I'm saying screw it. A couple minutes later I get the grand idea of tearing off the Jar-Jar poster, which I do, and manage to salvage my Liger sign.. along with a nice large Jar-Jar Binks sign as well. You win some, you lose some. On to the show..

All through the night, these two poor tools were running a carpet down the entrance ramp before a match, and rolling it back up before an interview. I guess the workers have had enough with killing themselves on that thing, though Liz nearly ate it on her way down. Pretty entertaining, actually.

Sid's position was foggy. He was a definate heel at the beginning and end of the show, but played a face during the Luger match. I suppose WCW wants us to choose the lesser of the two evils, as Sid was working the crowd a'la Hogan in the 80's. He'd "ask" us if we wanted him to hit The Package, and kept looking into the audience like a deer looks into headlights.

Nobody bothered telling the live crowd why Meng wasn't there, but I can't honestly say anyone really minded his absense.

Near the beginning of the show, I looked into the rows just in front of me and saw a bulky figure in a white WCW crew shirt. It took me a moment to figure out where I recognized him from, and by the time I realized, he was already backstage, through the same door Goldberg entered at the start of the show and Kimberly ran through after the David Flair skit. It was Terry Taylor. Had I realized beforehand, I'd have gone out of my way to shake his hand and offer my support.

DJ Ran was there... If only my excitement could jump off this computer into your face. He successfully butchered every song he played, by inserting his own name in at some point. Every song. It's pretty sick to hear "I did it all for the nookie.. so you can take that cookie and DJ RAN". He was booed mercilessly.

Benoit was the recipient of the 3rd largest pop of the evening, behind Bret Hart and Bobby Heenan (who's from this area). I can't express how happy that made me.

Goldust/7even/Dustin was sitting at the entryway for about 5 minutes before he made his appearance. I noticed nearly immediately, and mentioned to my roommate who he was. We spent the next minutes trying to figure out why he was just sitting there. When he did finally come out, his intro was spectacular. Seriously, I did enjoy the work that went into his entrance, but the floating deal was just stupid. Especially when factoring in the men behind the ring working the line that carried him.

Luger and Liz actually sprayed Sting with the mace on 2 separate occasions before he sold it. The cameras must have missed the first one, so they all moved to the other side of the ring and did it again.

During the Saturn/Bret Hart match, Shane Douglas was drenched with a full cup of beer after his interference. Security threw out 3 or 4 ticketholders for this incident, which makes all the sense in the world because only one beer was thrown. One guy even played to the crowd on his way out.

By the time the hardcore match rolled around, the fans had turned on WCW in general. When both men went backstage, a chorus of boos rocked the arena and fans could care less about the ultra-predictable ladder match turnout. If anybody knows how to kill heat, it's this new booking staff.

Jarrett was cheered wildly when he spun and nailed Booker's new "friend" with the guitar. How's that for against the grain?

Poor Curt Hennig played the face for the duration of his match, and tried his best in the ring (which, admittedly, isn't a shade of his former self), even bumping through the announce booth. The audience could've cared less. As he walked beaten down the aisle, he raised his arms but there wasn't a cheer in the house. He doesn't deserve this.

Ultimately, fans were sick of each man in the main event. All 4 men had been out to the ring numerous times over the evening, and I guess the impact had worn off.

Anyway.. I took off as Hart and Goldberg stood in the ring post-match and did a lot of nothing, along with the rest of the arena. Gone were the excited yells and exchanged high-fives of fans leaving the recent WWF event I attended, in their place were disappointed faces and unhappy viewers. A sign of another downward spiral? You bet. I don't see how they're pleasing anyone with this product.

The ride home was set to the tune of Oribal's CD, "Middle of Nowhere", which is incredibly excellent and worth a purchase. I nearly fell asleep at Nitro, so the drive home wasn't much better. I think I saw a couple demons in the hood of my car.. they were more entertaining than the $35 event I'd just witnessed. We finally pulled in to our parking spot after 2 AM and collapsed into bed. I'd planned to write up a review while still high from the event, but it should be obvious how likely that was. I instead set my aims for Tuesday, which didn't happen either.. I was still sleeping. So here I stand, offering my long-winded story a day and a half late and a page and a half long. But it's here, nonetheless.

Imagine my surprise when I popped in the taped Raw and enjoyed it. Maybe I should've made the 9 hour drive to Penn State.. they got to see some entertaining stuff.

As for me, I'm outta here. Look for some letters with my Survivor Series preview sometime tomorrow evening. Oh yea... and here, through the magic of computer-aided, image-enhancing software, you can see a close-up view of me at Nitro 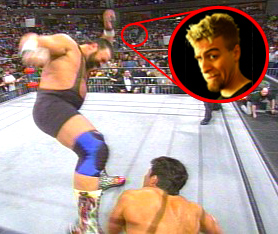 OK... so I didn't use a computer-aided image-enhancer.. more like Photoshop.. But that really is me in the circles (both of them). You can't really read my sign, eh?

Back to Mankind's book for me.
until then, i remain
drq
Posted by drqshadow at 3:01 PM

drqshadow
I'm thirty-something, still working my ass off and still relatively boring, honestly. I play more video games and watch more grown men fight professionally than could possibly be considered healthy, do the same thing in my spare time as I do in the office (which would be a combination of writing, designing and HTML / CFM / CSS) and honestly love my life just as it is. If you need to know more, that's why drqshadow.com is here.